Respect–Not by Default, It Must be Earned

I despise the way the term “respect” is frequently used.  When expectations are set for the interactions of a team or organization or classroom, “showing respect” is frequently cited as a prerequisite for civility.  This is an abuse of language and, more importantly, an abuse of the concept.  Saying that respect is an expectation is unreasonable, silly, and wrong.  It may be that this is just a question of semantics and folks are using the wrong word to mean the right thing, but if that’s the case, it’s time to clarify.  I recently heard the incomparable Paul Rayner give a presentation regarding Behavior Driven Development (though as an Aussie, he’d call it Behaviour Driven Development and we can forgive him for that).  He said a lot of things of value in the presentation, but one of the simpler things resonated with me the most.  He stated simply and effectively and efficiently regarding communication of the domain language that “language matters.” 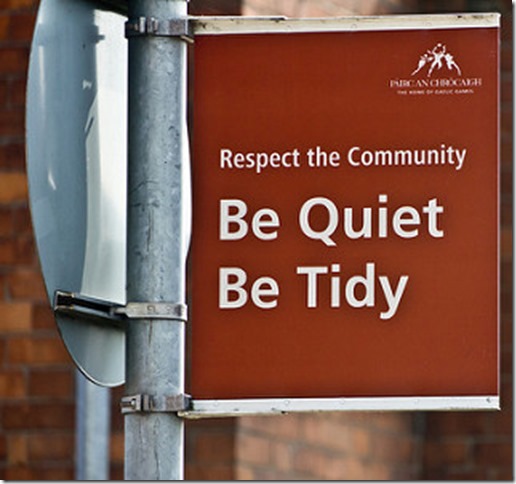 The word “respect” is overused.  I don’t want to say anything hyperbolic like “it’s the most overused term in the English language” because I haven’t given the matter enough thought to make such an absolute and grandiose statement.  Nonetheless, it’s an overused term and I don’t like the way it is use in a majority of cases.  What is respect?  The source used by Google to return definitions yields:

We can disregard noun definition 2 as it is something not relative to the way in which respect is used to which I object.  Noun definition 1 and verb definition 1 are essentially the same thing – the noun is the state of having reverence for someone or something and the verb is the act of having reverence for someone or something.  The key here is that it is the reverence is for the “abilities, qualities, or achievements” of the object of the respect.  This means that respect is a reaction to something virtuous in another.  Recognition of virtue is not something that should be given by default.  I will only say that I respect a person when they have demonstrated virtue.  Respect is not given by default – it is earned.  Thus, I will not give you my respect until you have demonstrated that you are worthy of it.  The virtue of a person like Rob Eisenberg is an example of being worthy of respect.  Rob is an amazing developer and an amazing person.  His contributions to the software community and to the world are remarkable.  I interviewed him for my podcast and it was remarkably clear in that conversation that he was present and giving his best to the task at hand.  I think that’s why things like Caliburn Micro, Durandal, and Aurelia are so amazing – he personifies presence and giving his essence to the task at hand – he has demonstrated on occasion after occasion that he is worthy of respect.  Rob Eisenberg has my respect because he’s an outstanding software person and simply an exceptional person.  His emphasis on family is further evidence of the type of person he is.  I love my interview with him and think it’s the best of what my podcast has to offer (so far).

I have heard parents demand respect from their children.  This is a heinous abuse of power.  Respect cannot be demanded.  It must be earned.  If my children respect me (and I think they do), I will not accept that it is because I have imposed and demanded and forced respect out of them.  If I have (and I haven’t), it is not respect.  Fear and respect are very different things.  I do not want fear from my children.  I want their respect and my every action toward them (I hope) reflects that desire and that I want to prove worthy of that lofty goal.  I have recently seen enormous behavior changes in my son.  He has decided that he wants to be like dad in many ways.  Nothing could thrill me more.  It is also terrifying, because it is an enormous responsibility.  Seeing the way my son emulates my behavior makes clear that I must be my best or I’m damning not only myself, but also those most precious to me to the consequences of less-than-optimal choices.  It sounds a bit silly to quote comic books, but “with great power comes great responsibility.”  I must be my best to make sure I am teaching by my example.  This is, to me, the meaning of respect.  It is my hope that my children (and others) will respect me not because of power I exert over them, but because of my worthiness.  Demanding respect is unproductive, an exercise in futility, and a wasteful and immature action.  You can do better.

I am not arguing for the Wild West of treating people in any way less than that prescribed by the Golden Rule.  I’m not saying it’s not important to treat others well.  I just think a different word is more appropriate for this and that it communicates better what we are after: courtesy.  Courtesy refers to treating other civilly and in a manner one would like to receive in return.  Returning to the Google definition provider well, courtesy is this:

You get my courtesy by default.  I will be courteous to you until you prove that you are unworthy of it.  Even then there’s a degree of courtesy I will proffer to even the most unworthy.  Courtesy refers to civil discourse.  Respect is a completely different matter.  It is a measure of virtue, a measure of admiration, a feeling of reverence.   Saying that you should be respectful to everyone cheapens and demeans what it means to truly respect someone because they are truly admirable.