This blog is about the optimization of the software professional and includes mostly content about designing and implementing systems, tips and tricks for better code, functionality, and testing, and ways to get more out of your time as a professional and as a human.  This includes enjoying life and being in the best physical condition you can be given your priorities and goals in order to serve your production and success.  Success in anything typically leads to more and greater success and happiness and joy in life, leading circularly to greater productivity and overall well-being.  It is because of the holistic view I take in the productivity and humanity of my readers, that among things of a more technical nature, I think it appropriate to include a review of something more emotional and psychological.  Over the last few years, I feel my productivity has taken a bit of a dip.  It has recovered and I feel I am now getting as much done as ever before, but I think I lost a degree of what I like to call my badassery due to having a degraded emotional state.  For this reason, it is entirely consistent with the intent of this blog to include a reference to something I feel has the potential to shatter many of the barriers to emotional fulfillment with which so many of us, especially those who are married, must deal.

Dr. Gary Chapman has done the world an indescribable service in putting forward his concept of The 5 Love Languages.  I read this book only recently and putting into practice the concepts therein is still a work in progress for me, so I am not prepared to say that it is the solution to the problem of the difficulties of inter-personal relationships.  Despite being fairly new to Dr. Chapman and his ideas, I think his book and his formulation of human connection is special and revolutionary.  I have instantly added it to my canon of what I consider to be the great texts that should be read by every human interested in maximizing their potential and being the best person they can be.

In a sense, it is intuitive to think that humans communicate their emotions, their needs, and their affection differently.  It’s not earth shattering to acknowledge that all people have differences and to point out that no two of us are exactly alike.  We know we’re different and everyone should be used to that by now.  Still, marriage itself is in a shambles.  Divorce is winning.  Even when divorce is held at bay, marriage is seldom a fairy tale story.  Families are being ripped apart at an astounding rate and people are generally miserable in a great number of relationships.  At the time of writing, the condoning or condemning of gay marriage is a topic of great debate.  I have found great amusement in the joke stating “I support gay marriage. I believe they have a right to be as miserable as the rest of us.”  I have seen this attributed to Kinky Friedman, but don’t know anything about him and don’t know if that’s accurate and it seems there are other attributions.  Regardless of the source, this joke is funny to me because of its perspective and the truth with which it rings.  I had even, at one point, come to the conclusion that choosing marriage is a choice for torment and gloom and that it only has value in providing a situation helpful in the raising of children.  Essentially, my position had become that marriage was an agreement of receiving eternal misery in exchange for acquiring a partnership in the multi-year effort to transform helpless babies into responsible adults.  I have backed off that position and have now come to a position of feeling that marriages can succeed and can enhance the lives of the participants.  I have changed my mind into thinking that the committed association of individuals can redound to mutual benefit.  It can only do it, though, when there is communication that is understood.

It defies easily accessible understanding to reconcile the difficulty we have in creating happy marriages with the good intentions with which marriages start.  It’s hard to understand how and why so many of us are so miserable.  I think Dr. Chapman is really onto something with his idea of people speaking different love languages.  The use of language as the example of how the communication of love is expressed and how it is often missed is perfect for several reasons.  The first and most obvious is that language is the simplest way for us to understand communication and is the meta-understanding way we can communicate about communication.  In addition, speaking different languages is an appropriate illustration of how two people can communicate the same thing and not understand each other.  It’s easy to imagine individuals speaking different languages and failing to communicate.

Because we each share our love in the language we naturally understand and expect, hope, and desire love expressed in that same language, it is a challenge to remember the love in any human relationship when there is a mismatch in the protocol being used.  Like sending a SOAP message to a RESTful service endpoint, showing love for a partner in your own language, rather than theirs, probably just results in an internal server error with an HTTP status code of 500.  Thus, the discovery of this exceptional work and coming to terms with the need to speak the language of one’s partner is akin to acquiring a droid, fluent over 6 million forms of communication, to bridge the chasm dividing so many marriages. 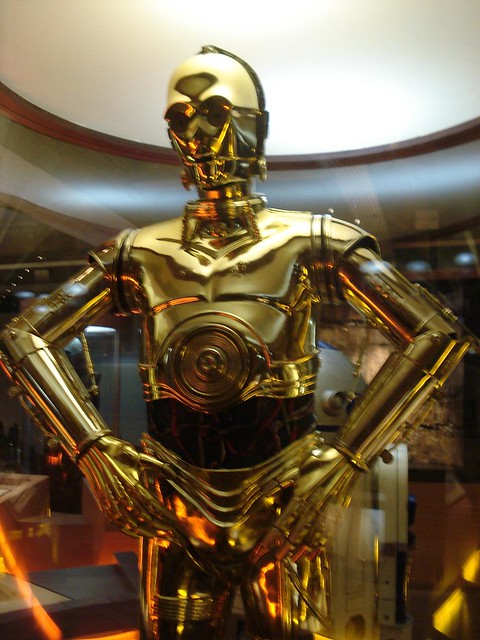 Could C-3PO actually be Dr. Chapman in disguise?

In The 5 Love Languages, Dr. Chapman tells us about our fundamental need to feel loved and describes humans as containing an internal “love tank.”  With a full tank, we are “fully operational,” and operate at our best.  When running on empty, we’re like a freighter with a  faulty hyperdrive, unable to give our best when under siege by an Imperial fleet (or any other time we need it most).  Filling the tank requires communication that we matter in an idiom we comprehend, preferably our “primary love language.”  He identifies 5 distinct languages:

Though most of us can communicate in multiples of these languages, we typically have one that is our primary – the way we understand that we are loved.  The essential truth Dr. Chapman asserts is that you must communicate your love for your partner in their primary love language.

After reading the book, I decided to put some of the principles into practice and follow some of the templates outlined in the book.  I have attempted to express love for my wife in using what I have learned about how she communicates love and how she understands.  Interestingly, my wife and I could not be more different in our languages.  Of the 5 languages given by Dr. Chapman, my primary is the one she gives the least value and her primary is of little repute to me.  We have even shared our disdain over the years for those styles of love expression.  I find the obligatory giving of gifts on certain days of the year to be an abhorrent custom worthy of ridicule.  Is it any wonder we have had a failure to communicate?

The remarkable truth of this experiment of speaking my wife’s love languages is that the messages have been received and responses were returned with 200 status codes and with content bodies encoded in my dialect.  I am still early in my process of changing my behavior according to what I have learned from Dr. Chapman’s writing and it’s possible that this too will fade and the tedium of daily life will again conceal the joy of marriage.  I think differently, though, and consider The 5 Love Languages to be “A New Hope”.